“Today’s flash estimate of the Eurozone GDP growth for the first quarter of 2019 showed that the bloc as a whole grew by 0.4% quarter on quarter which was above expectations and the 24th quarter of consecutive growth recorded since 2013.

"We don’t have a full national breakdown with the exception of some of the larger economies like France, Italy and Spain which collectively account around half of Eurozone output. However, we can infer that the rest of the Eurozone excluding these three economies also grew strongly in the first quarter of the year. It also suggests that the soft patch of German output growth recorded in the last two quarters of 2018 has probably ended.

"The national breakdown of the data showed that Italian economy grew in the first quarter of this year putting an end to its 6th recession in the 21st century. For France, even though output expanded by a respectable 0.3% on a quarter-on-quarter basis it was less strong than expected. However, we expect the recent tax cuts announced by the French authorities to sustain demand in the short-term, assuming households continue to spend rather than save.

"Finally, Spain continued to defy expectations growing at a rate of 0.7% quarter-on-quarter in line with its post Eurozone crisis average rate. The figure below shows that Spain’s GDP in level terms is now around 16% higher compared to the low it struck during the Eurozone crisis. This is the second best performance when compared to other peripheral economies, with sunny Cyprus managing to outperform others growing its economy by about 18%.

"Does today’s data herald the beginning of a synchronised upswing in Eurozone GDP growth? It is probably too soon to tell with one quarter’s worth of data but Eurozone policymakers will be watching whether the momentum continues in the next few quarters." 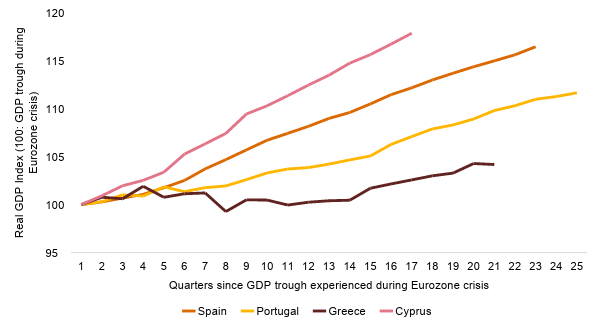 Note: We have omitted Irish GDP as it is skewed by the 25% growth rate recorded in 2015