New research out today from PwC reveals that Northern Europe and East Asia are the global hotspots for idea creation, with the UK behind much of the rest of Europe.

The Global Economy Watch report compares idea intensity, which is the number of patents granted per million population, and finds that the UK is behind Belgium, Norway, Ireland, Switzerland and Finland, among others, and ranks only 19th in a list of the top 20 idea-intensive economies around the world.

South Korea tops the list of the world’s most idea-intensive economies and is granted more patents per million people than anywhere else. Interestingly, idea intensity is concentrated in two geographical regions - Northern Europe and East Asia - and all of the Scandinavian countries other than Iceland make the top 20.

“While it is striking to see the UK lagging behind many European nations in terms of idea intensity, it has actually climbed the global rankings between 2010 and 2017, going from 25th to 19th. In 2010, the UK averaged 224 patents granted per million population, increasing steadily to 311 patents granted per million population in 2017 - although this is still almost four times less than the amount granted to people in Sweden, for example.”

A key reason why Scandinavian and East Asian countries have outperformed their peers is because they focus on a small number of patent technology areas, which has allowed them to develop specialist capabilities. For example, around 10% of Nordic ideas were focused on environmental technologies in 2017. This focus is likely to have been encouraged by the fact that they are geographically well placed to benefit from renewable technologies (especially wind and hydropower) and have all set ambitious targets for emissions reduction.

In South Korea, Japan and China (which rank 1st, 4th and 20th respectively in the list of top idea intensive economies) there is also evidence of specialisation, with three sectors prevailing across the region: computer technology, electrical machinery and digital communication technologies. Growth in the number of patents in these sectors in these three economies has risen rapidly since 2010, averaging 11% a year, compared with 8% in the US. In 2017, China had more patents granted in computer technologies alone (28,700) than the total number of patents granted to Canada, Australia and Spain combined.

With respect to how the UK and other economies can raise their idea intensity, the report notes that  higher spending on research and development (R&D) is one potential policy. PwC found a strong positive correlation between economies that spend a lot on R&D and those that create a wealth of ideas, with around 70% of a change in a country’s idea intensity owing to a rise in R&D spending.

“The focus on ideas is good news for the global economy. Ideas lead to the creation of businesses, which generate innovative products and services to sell. The best ideas strengthen competition, increase productivity and ultimately raise living standards, therefore it’s important that governments offer incentives to help develop ideas into revenue-generating reality and ensure continued and consistent spending on R&D.” 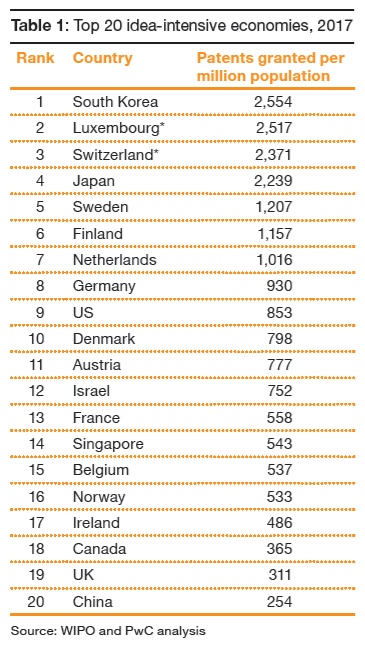 For further information regarding Global Economy Watch or to read the full report please visit https://www.pwc.com/gx/en/issues/economy/global-economy-watch.html