●        37% of people in Northern Ireland say that society as a whole is ‘fair’; the national average was fewer than one in three

More than half of  people in Northern Ireland believe society is not fair, has one rule for some and a different one for others and that rich people have an unfair advantage, according to the latest survey by PwC.

PwC set out to identify how the public define ‘fairness’, if they feel they are being treated fairly and who should be facilitating it in society. Its latest Future of Government report, Making the UK Fairer, aims to identify practical ways to embed fairness as a core principle in the design of public services, with the Rt Hon Alan Milburn chairing the Steering Group.

The overwhelming majority of the 4,000 people who responded to the survey across the 12 UK regions said fairness is about making sure that everyone is given an equal opportunity to achieve (81%). A similarly high proportion (70%) believe that fairness is about making sure everyone gets what they deserve with the same number agreeing that, out of all stakeholders, government has most responsibility for achieving fairness in the UK (70%). But only 24% of people think the “UK government does a good job when it comes to making sure that people are treated fairly”, with the Steering Group describing this as ‘major challenge’.

Attitudes towards fairness are more optimistic in Northern Ireland than in other parts of the UK. While only 37% felt society was fair, 50% agreed with the statement: ‘Society treats people like me fairly’ compared to the UK average of 39%, and over half (54%) said if they feel they’re being treated unfairly, they can do something about it, whereas the average was 44%. Whilst London is the most positive region, people living in Northern Ireland are about twice as likely to say society treats them fairly than people living in the South West of England. 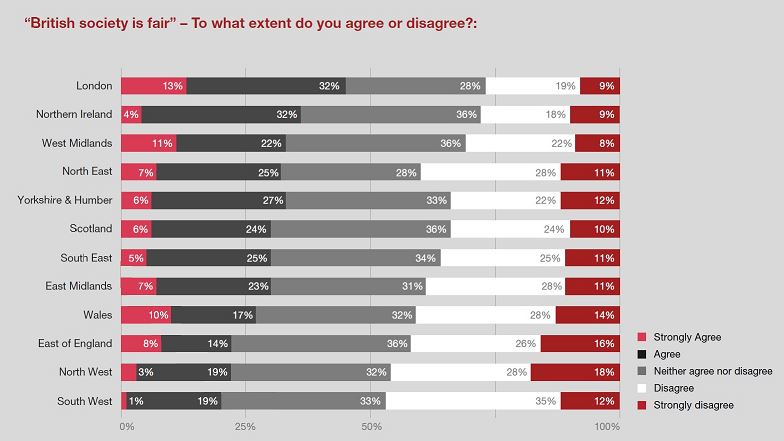 Based on the survey results and on extensive engagement with senior UK government officials, and leaders in public sector service provision and business, PwC’s Making the UK Fairer report has created a framework of five tests for fairness. These draw on best practice elsewhere, including New Zealand’s Wellbeing budget priorities and on PwC and Demos’ rolling research into Good Growth for Cities where health and happiness - and not merely wealth - is a measure of fairness in society.

The PwC report believes that the five tests could be used by government to design and test public policy that could help build a fairer future for the UK. The five tests are:

●        Provide for fundamental needs, prioritising the vulnerable and those in greatest need

●        Close the “fairness gap” between places and opportunities

●        Give individuals more control over the services they access

●        Empower communities to shape the places they live

“Brexit is dominating so much of the day-to-day conversation but we believe it’s critical to stimulate debate about its underlying issues and at the heart of this is fairness. Perceptions of what this means vary widely but as we prepare to leave the EU, the challenge we all face is to reconnect people and bridge stark divides.

“There are three key steps we believe are needed to put this into practice: incorporate an assessment of impact on fairness to the process government uses for making investment decisions; refocus spending to more explicitly meet the needs of those who are, and feel, ‘left behind’; and finally design the spending review planned for the Spring so that all departmental spending proposals have to demonstrate how they will boost fairness against the tests.

“Improving the UK’s wellbeing requires wholesale transformation of the way the state works but, with ambition and political will, it can be done.”

“Addressing these fault lines in UK society is clearly a major challenge but it’s critical that we do so. If the UK is to fulfil its potential in the world, whatever our future relationship with the EU might look like, we need to ensure that everyone in our society is fairly represented.

“This new framework of five tests built on the public’s priorities will be a critical tool for the government to test and design public policy in a way that would build a fairer future for the UK. The concept of fairness remains a central pillar of our identity and one we must embrace to close the significant opportunity gap in our society.”

Designing and delivering ‘fairness’ is not a new notion. Successive governments, including three reviews by the Equality and Human Rights Commission (EHRC) and the Social Mobility Commission’s recent State of the Nation 2018-19 report, have challenged how to make the economy work for everyone and how people of all backgrounds can get equal opportunities.

The Making the UK Fairer report is the first in a series of PwC Future of Government publications and was created by listening to views on fairness from business, our staff and the UK public.  We will share our emerging agenda of practical proposals for action over the course of Autumn 2019, looking at how to apply our framework to the following priorities: How we work, How we access services and Where we live.