The creation of jobs and environmental improvements are the strongest areas of improvement in Belfast and Londonderry over the last twelve months, according to the latest Demos-PwC Good Growth for Cities 2019 index.

It named Belfast as the fourth largest improver of all UK cities since the financial downturn however while the index identifies where strategic policies have delivered a positive impact, it also signals that the city faces significant growth challenges.

Below average increases in skills, the formation of new businesses and income means Belfast’s overall performance is on a slower trajectory compared to other UK cities and it has once again dropped down the national league table. It is now ranked 34th out of 42 cities; in 2016, it was 26th.

While each of the devolved cities saw an absolute increase in their scores relative to the 2015 - 2017 index, Derry – though still 11th out of the list of 11 devolved cities - saw the biggest improvement of all.

Published today [12 November 2019], the Good Growth for Cities index sets out to show that there’s more to life, work and general well-being than just measuring GDP. The index checks the performance of 42 of the UK’s largest cities, England’s Local Enterprise Partnerships (LEPs) and ten Combined Authorities, against a basket of ten indicators based on the views of the public on what constitutes  economic success and wellbeing.

These include employment, health, income and skills - the most important factors as judged by the public - while housing affordability, commuting times, environmental factors and income inequality are also included, as is the number of new business start-ups.

Since the financial crash Belfast’s overall index score has improved, with only London, Liverpool and Newcastle performing better. This has primarily been driven by an improvement in the skills of people aged between 16 - 54. While Belfast lags behind the national average in this critical measurement, there is reason to be optimistic this direction of travel will continue. 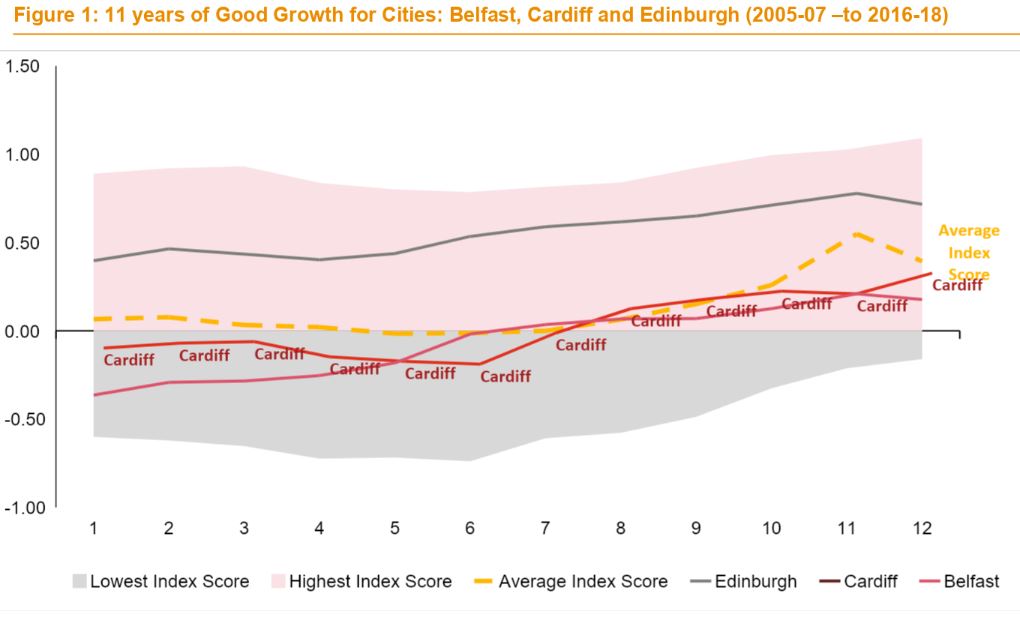 Over the last twelve months, skills in the 16 – 24 age category has seen the greatest improvement, in contrast to a slight decline across UK cities. The recent PwC Upskilling Hopes and Fears report found people in Northern Ireland are being offered more upskilling opportunities by employers to adjust to increasing automation in the workplace than any other UK region, and four out of five would take the opportunity to better understand and use new technologies.

Similarly while the city is behind the average of competitor cities in terms of new business creation, over the past year this benchmark has seen strong increases, as well as in income and in the reduction of carbon emissions. In 2018 Belfast City Council was recognised for making the most improvement in its recycling performance outs of councils across England, Wales and Northern Ireland, a result of the ‘No Food Waste in Black Bins’ campaign which led to a significant reduction in greenhouse gas emissions.

For several of these ‘good growth’ indicators, Belfast performs above average yet its score has dropped since the previous index with the ‘price of success’ rearing its head in terms of housing affordability becoming more challenging, an increase in the number of people working over 45 hours/week which impacts on work/life balance, reduced owner occupation and income distribution. The biggest decline for the city was in commuting times.

Derry saw above average growth in income distribution compared to the 11 cities in the devolved nations on the list, as well as improvements in new jobs, income, new businesses, skills and a reduction in carbon emissions.

Health is a standout feature in terms of below average scores across the devolved cities, measured by the percentage of the population who are economically inactive or deemed to have long-term sickness. Northern Ireland has seen a decrease in score since last year with more than half (56%) of those who were unemployed in August falling into the one year or more category – compared to a quarter in the UK. Only Aberdeen measured better than the average in the index.

“With two City Deals now on the table for Northern Ireland, there is a critical window of opportunity for stakeholders to work collaboratively on a shared and credible economic future and seize the potential in these large-scale investments. With Belfast and Derry performing well in terms of bringing in new jobs, it’s important that lessons learned from achieving this goal are now applied to other areas.

“Successful city planning involves creating high-density urban centres and, with ambitions to move 66,000 people into Belfast by 2035, the way people here live and work could be radically transformed. The ‘price of success’ is taking a toll on housing affordability and, while conditions are better here than in the majority of other cities, this could be impacted if people start to move in without sufficient supply to meet demand. However, there are many factors which need to be addressed to support this – the water system being possibly the most urgent as we see from NI Water’s ‘No drains, no cranes’ campaign.

“One of the crucial areas will be in continuing to support the growth in skills, which feeds into the creation of new businesses. The appetite for upskilling among workers as well as employers proactively investing in their workforce – particularly during the uncertainty around Brexit - means we’re on the front foot to benefit from employability programmes funded by the City Deals.”

“There are a lot of encouraging indicators that we are on the right track towards achieving the inclusive growth which is at the heart of the Belfast Agenda, and which will be bolstered by the Belfast Region City Deal.

“As a transformed city, we are still at the start of our journey; but the strategic approach taken by Council and our commitment to addressing employability and skills is paying dividends, as evidenced in today’s report. A skilled workforce will attract investment, and our investment in innovation and technology and the introduction of Local Full Fibre Network, will make us one of the most connected cities in the UK which will be a draw for multinationals.

“I’m also encouraged to see that the environmental improvements we have achieved as a city have been recognised as contributing to our growth.

"As we work to deliver the Belfast City Region Deal, we will be focusing on developing a distinct set of industries and growth sectors but we cannot do it alone; so I’m delighted that Derry has also experienced significant growth as it makes the whole of the North much more competitive on a global scale which can only be good news for the entire region.”

For the fourth year running, the two highest performing UK cities on the Good Growth for Cities 2019 index are Oxford and Reading, followed by Southampton. Although Reading has maintained its position in this year’s index, it has seen a decline in index score driven by poorer house price to earnings ratios, income inequality and a fall in new businesses per head. Bradford emerged as this year’s top improver, driven by jobs, work-life balance and skills amongst its 25+ year olds.

However, with Brexit on the horizon, the UK faces issues around attracting talent and retaining businesses according to the latest PwC/Urban Land Institute report on emerging trends in property. Almost 1,000 property investors, developers, fund managers and advisers from Europe were surveyed, and 70% said they believe as fewer people come to work in the UK, business relocations to continental Europe will increase next year. In a table assessing the overall prospects for European cities in 2020, only London represented the UK (3rd place), and Dublin came in at 12th.

“In an era of political, technological and environmental disruption, cities and regions that want to get ahead, need to do things differently. Even with the uncertainty of Brexit, over the last year, local leaders have had significant success in delivering good growth in their cities and regions. Our research shows the need to take a comprehensive approach to growth, focusing on improving productivity to compete on a global stage, but also on ensuring fairness and inclusive growth so that people and places don’t feel left behind.