Building trust in the climate transition

There has been a marked acceleration in the number of chain stores closing across Scotland, with 780 shuttered in the first half of 2021, compared with just 344 openings, according to the latest research by PwC and the Local Data Company (LDC).

This led to a net loss of 436 stores, representing a 2.8% decline in the number of stores between January and June this year.

In the first half of 2021 more than 8,700 chain stores closed for good across Great Britain, leading to a net decline of 5,251. This change of -2.5% is an improvement on the -2.8% recorded in the first half of 2020. However, in Scotland, a longer period under lockdown means the country fared worse in early 2021 than the same period last year.

Government support, in particular extended furlough and business rates relief, has enabled operators to stay in business, while a rent moratorium has prevented landlords from evicting operators due to non-payment of rent or arrears. These measures have allowed stores to continue trading even where sites have been particularly hard hit by successive lockdowns.

Shopping centres have been hardest hit in Scotland, with just 23 new stores being opened, against 163 closing. This represents a 6% net decline, markedly higher than the 2.4% decline noted on the high street where 550 closures were offset by 263 openings. Scotland’s high streets proved more resilient than Great Britain overall, where the net decline was 3%. In retail parks, there were 67 closures and 52 openings, leading to a 1.1% decline overall.

Retail parks fared relatively well with many anchored by grocery, DIY and home furnishings retailers, categories that have outperformed others since the start of the pandemic. With Covid safety a key consideration people still appear to be more inclined to drive to retail parks to avoid using public transport and the larger units allow for better social distancing measures.

Many shopping centres by contrast, are often less conveniently located for consumers who want to shop locally and travel less to city centres; they are also more likely to host fashion retailers and chain restaurants, which are amongst the hardest hit categories for net closures over the past year. Meanwhile, the drop off in high-street footfall has affected those multiple retailers located on high streets, particularly those in large city centres. 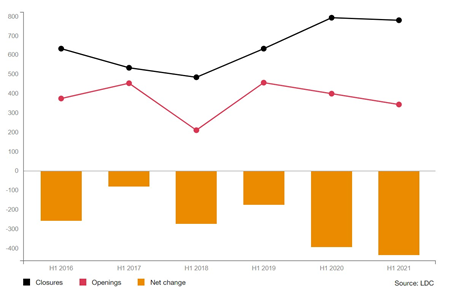 Table 2. There have been more net store closures in Scotland in the first half of 2021 than in any of the previous five periods.

Jason Higgs, Head of Retail for PwC in Scotland comments:

“We were already seeing a fundamental change in consumer shopping habits before the pandemic hit, and what we are seeing now is the full impact lockdowns have had on the high street and shopping centres, though without government support the picture would be considerably worse.

“The next six months are going to be crucial for the retail trade, and we will have to wait to see whether consumers will shop with their feet or their fingertips. From what we are seeing, consumers are still looking for a physical shopping experience for ‘revenge spending’ after a lengthy period at home.

“We still saw more than 300 new stores open in Scotland, so there are opportunities for retailers and hospitality operators who are able to open new stores or to move to better locations.”

On a sector-by-sector basis across Great Britain as a whole, the growth seen in a small number of categories is nowhere near enough to offset the declines in other categories, with only the top two categories seeing double digit growth in the number of units. Leisure dominates growth, with takeaway chains buoyed by a rise in delivery as well as walk-in demand. Smaller chains and franchise operators, such as cake shops and amusement arcades, have also been able to take advantage of lower rents and vacant units to expand their footprints.

The big net declines in many other categories reveal a level of overcapacity in the marketplace, but also the impact of major shifts in how consumers buy and transact. The shift to online, accelerated by consumer behaviour during Covid lockdowns, continues to be the biggest common denominator for closures in both retail and services. For example: