The number of new high street stores opening in 2017 fell to 4,083, from 4,534 in 2016, according to research compiled by the Local Data Company (LDC) for PwC. The data shows that the second half of 2017 saw substantially more closures and less openings than the first six months of the year, reflecting a tough trading environment including a slowdown in consumer spending, rising staff and business rates costs, as well as a slowdown in food and beverage growth as consumer confidence reached a four year low in December 2017 (Source: GfK).

"2017 was tough for the British retail industry, particularly the second half of the year. We saw volatility from month to month and across different sectors as wage growth failed to keep up with inflation, forcing many shoppers to think more carefully about their spending habits.

“On top of this, many retailers are increasingly feeling the impact of the acceleration of online shopping as consumers begin to feel more comfortable with the price transparency and reliability of delivery options offered by online players. Digital offerings are increasingly becoming make or break in areas like fashion, but also for banks, travel agents and estate agents – all of which closed a significant number of high street outlets last year. For these sectors, store closures are less driven by the market environment and more by bigger structural changes, as customers increasingly expect to interact with their service providers online or via apps.

“We’ve seen a tough start to 2018, but it’s important to remember the British high street still plays a vital role in society and there are elements of growth amongst the headline numbers of decline. For example, almost 400 new clothes shops opened last year, even though over 700 closed. And, while four pubs a week closed, at the same time three a week opened.

“Retailers and leisure operators need to continue looking at their businesses - including their store portfolios - to make sure they have a clear brand and product offering. The winners at the moment, such as nail bars, coffee shops, bookstores and craft beer pubs, are all flourishing because they serve the needs of emerging consumer segments, such as experience-seeking millennials and offer a differentiated physical proposition that online offerings can’t compete with.

“The British high street is undoubtedly facing headwinds but retailers are waking up to the challenge and reimagining the future. The winners will be those who are agile and open minded in working out the best way to ensure their stores differentiate themselves and earn their place on the high street.”

"The end of 2017 was hard for UK retail and we've seen this continue into 2018, with the toughest first quarter of the year for the sector since the recession. We've seen some well known names impacted as they face a perfect storm of issues - a fall in consumer confidence and reduced spending alongside a number of cost headwinds.

"Many retailers are using restructuring tools as a way to resize their store numbers. Survivors and thrivers will be those who address their cost issues and have a compelling 'bricks + clicks' offering to help them meet changing consumer trends and compete with online retailers who don't have the same legacy cost issues."

Leisure chains (food, beverage & entertainment) have continued to see growth on the high street, with a net increase of 12 units (+0.07%) in 2017. This was, however, a sizeable slowdown on previous years (2016 saw +126 units and 2015 saw a net change of +271 units), reflecting the challenges these chains face from saturation in the market.

Service retail - retailers that offer a service such as hairdressers, banks, travel agents, etc - saw the biggest increase in closures in 2017, with 583 more closures than in 2016 (-3.2% fall in net change), and accounted for over a third of all closures on UK high streets. This classification accounts for three of the top four fallers (travel agents, banks and estate agents), with travel agents seeing the biggest loss in units across Great Britain in 2017. These categories have all been affected by the rise of online offerings such as travel booking and estate agents services. 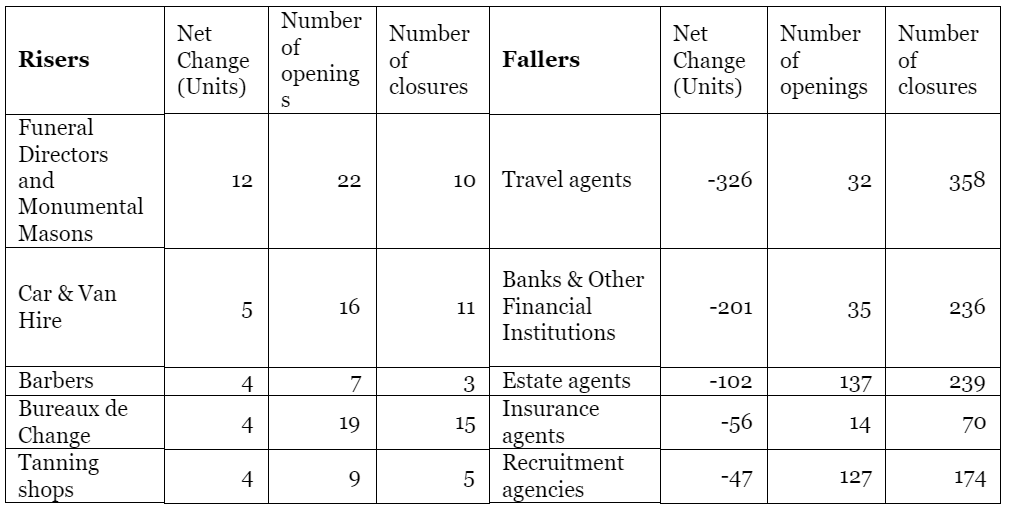 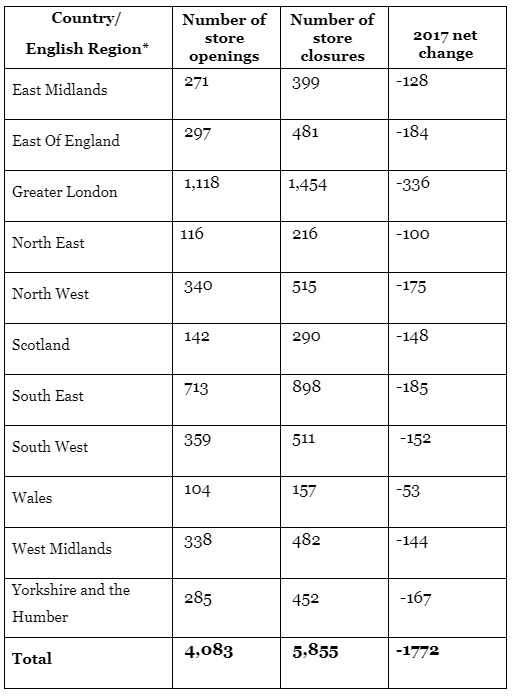 Table 3. Openings and closures of multiple retailers by region across the top 500 GB town centres in 2017 (Source: Local Data Company)

London saw the greatest number of net closures (-336), with this region being hardest hit by the business rates reassessment and a degree of saturation in the London casual dining market.

“There is of course no doubting that we are experiencing a period of great change in retail, and the question around the relevance and role of stores is still very much on the industry agenda. LDC’s latest figures show that there continues to be a vast amount of churn across the physical landscape and, whilst the gap between openings and closures has widened slightly in 2017, we are seeing certain sub-sectors really gain traction.

"It is this ‘re-occupancy’ and evolution of the use of space which is most striking, as banks become coffee shops, pubs change to nurseries and nail salons open in the space vacated by fashion shops. In 2017, the sub-sectors with the highest growth rates largely have ‘experience’ in common, as consumers are still very social and want to engage with their high streets and physical space in a way which perhaps replaces traditional shopping activities, some of which has moved online. Likewise, these corners of the retail landscape play well for consumers looking for more affordable luxuries as consumer uncertainty persists and spending remains of a cautious nature.

“It is also interesting to note that despite the onslaught of digital and audiobooks, readily available via the likes of Amazon and Apple, booksellers are on the list of 2017 ‘risers’. Perhaps unexpected but then again does this suggest there is hope for more traditional retailing of physical products, if done well.

“For 2018 we predict there will be continued green shoots of growth across almost all sub-sectors, visible beneath the headline trends, as newer entrants and younger brands take this ‘shake out’ as an opportunity to pick up available property. Businesses with a relevant proposition and a strong understanding of their customer can absolutely still thrive in the right locations. Equally more established brands who continue to tweak their offer and innovate on the way through will no doubt see positive results and retain their valued place on our high streets.”

PwC refers to the PwC network and/or one or more of its member firms, each of which is a separate legal entity. Please see www.pwc.com/structure for further details. © 2018 PwC. All rights reserved