Over 8,700 chain stores disappeared from Great Britain’s retail locations in the first six months of 2021. In total, 3,488 shops opened, compared to 8,739 closures, creating a net decline of 5,251, according to PwC research compiled by the Local Data Company (LDC).

However, there was some reprieve for both retailers and leisure operators, with the number of closures falling faster than than the number of openings. As a result, the overall net closure rate is 750 lower than it was at the same point last year, despite some high profile administrations of high street fashion and department stores in early 2021. 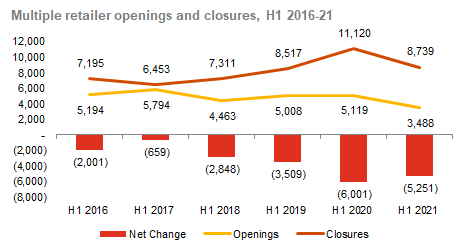 Government support, in particular extended furlough and business rates relief until June 2021, have enabled operators to stay in business. Whilst a rent moratorium has prevented landlords from evicting operators due to non-payment of rent or arrears. These measures have allowed stores to continue trading even where sites have been particularly hard hit by successive lockdowns. Meanwhile, as spending intentions return to pre-pandemic levels, pent-up demand as lockdown measures eased has converted into better-than-expected retail sales in the first full months of trading.

Cities are suffering more than other towns

Despite the slowdown in net closures the flight from cities continues to contribute to the decline in multiple stores, with city centres now faring worse than commuter towns and villages (-4.3% vs -3.0% and -2.3%).  Footfall in cities is yet to recover to pre-pandemic levels as more people work from home and in the longer term move towards a hybrid working model.

London is a tale of two cities with the City and West End declining faster than suburban areas which are supported by those working from home visiting their local high streets. In a reversal of fortune London has gone from being the best performing region in 2016 (-0.9%) to the worst in 2020 & 2021 (-2.9%).

Regional performance has also reflected the higher number of closures in cities. For example, South East and East Anglia have been relatively protected, and have been amongst the most resilient regions in the past two years, as commuters have stayed close to home.

Meanwhile, longer lockdowns in Scotland and Wales last year meant that these regions fared worse in early 2021 than in 2020, with some store closures delayed until the current year, bucking the trend across Great Britain of slower closures.

The type of location continues to matter above all else across all regions.  Retail parks have seen a smaller number of net closures (634), compared to high streets (3,643) and shopping centres (1,464).

Retail parks have fared better, with many anchored by grocery, DIY and home furnishings retailers, categories that have outperformed others since the start of the pandemic. With Covid safety a key consideration people still appear to be more inclined to drive to retail parks to avoid using public transport and the larger units allow for better social distancing measures.

Many shopping centres by contrast, are often less conveniently located for consumers who want to shop locally and travel less to city centres; they are also more likely to host fashion retailers and chain restaurants, which are amongst the hardest hit categories for net closures over the past year. Meanwhile, the drop off in high-street footfall has affected those multiple retailers located on high streets, particularly those in large city centres.

“After an acceleration in store closures last year coupled with last minute Christmas tier restrictions and lockdowns extending into 2021, we might have expected a higher number of store closures this year. Government support has proved to be the lifeline for many to weather the storm and survive the pandemic. The fate of many operators has also been helped by resilience in consumer spending, including investment in the home through lockdown and using enforced lockdowns savings for ‘revenge spending’ when possible.

“However, operators are far from out of the woods and the next six months will be a make or break for many chains, particularly with the reinstatement of full business rates for all but the smallest operators, the winding-down of furlough support and agreement yet to be reached between many operators and landlords on rent arrears. There is also continued uncertainty for hospitality businesses who will be apprehensive of further restrictions on operating and the possible requirement for vaccine passports later in the year.

“But the good news is that there are some green shoots of optimism. Consumers still want a physical shopping experience and a number of chain stores and restaurants are opening.  There is opportunity for operators who can be nimble, taking advantage of the current situation to either open new stores or to move stores to better locations.”

On a sector by sector basis the growth seen in a small number of categories is nowhere near enough to offset the declines in other categories, with only the top two categories seeing double digit growth in the number of units. Leisure dominates growth, with takeaway chains buoyed by a rise in delivery as well as walk-in demand. Smaller chains and franchise operators, such as cake shops and amusement arcades, have also been able to take advantage of lower rents and vacant units to expand their footprints.

The big net declines in many other categories reveal a level of overcapacity in the marketplace, but also the impact of major shifts in how consumers buy and transact. The shift to online, accelerated by consumer behaviour during Covid lockdowns, continues to be the biggest common denominator for closures in both retail and services. For example:

Fashion and department store closures, particularly in the first quarter of the year, where chains were acquired by online operators with no ambition to operate stores;

“In the uncertain times ahead it's likely that not all shopping locations will survive in the same form, so investors will be considering how to repurpose the spaces to ensure profitability. Showcasing independent and local operators rather than the chains that are retreating could attract more footfall. On the other hand, converting for alternative use, whether housing, offices or civic services could be on the cards. The current overcapacity of retail space needs to be addressed and effective changes will require the cooperation of government, landlords and operators.”

“As we move through the second half of 2021, we can now start to truly assess whether the market is entering into a ‘recovery phase’ following wave after wave of restrictions to retail and hospitality trade, designed to suppress the spread of the coronavirus. Despite LDC’s latest research showing that total vacancy across GB had reached an all-time high of 14.5% at the end of H1 2021, there are promising signs that the speed of the decline we were tracking across the worst of the pandemic is slowing. Our latest research on behalf of PwC points to a gentler net decline and pockets of resilience in key sectors such as fast food take away and convenience stores. Beyond this, we have witnessed the independent retail market returning to modest growth as consumers were motivated to support local businesses.

“That being said, the compound impact of multiple lockdowns can’t be ignored and whilst a slowdown in store closures is certainly welcome and a positive sign, the volume of empty units across GB is at a record high with no sign that the demand will ever be there to meet the supply. In fact, the data for H1 2021 indicates that openings were at the lowest they have been for 6 years. I fervently believe that there is still appetite for retail and leisure provision away from online, especially for occupiers that innovate in order to retain consumer interest long-term. However, the key to protecting our retail destinations will be for landlords, councils and place makers to proactively consider surplus space and how they can redevelop property for other uses outside of retail.”

The Local Data Company tracked 205,565 outlets operated by multiple operators across Great Britain, between 1 January and 30 June 2021. Due to the nationwide Covid-19 lockdown, no fieldwork was undertaken between mid-March and May 2020, so the comparison period from last year is January to August 2020.