Leicester has maintained its position as a top-performing UK city for the third year running, remaining as the tenth highest performing city this year, in PwC’s Good Growth for Cities 2019 index.

When measured against the priorities chosen by the public, four out of eight cities in the Midlands achieve scores above the UK average, with Leicester and Milton Keynes being the two cities in the top 10 of this year’s index.

Leicester scores well for its unemployment rate, new businesses per head, skills and income distribution, but below average on variables such as work-life balance and environment. The city saw the biggest increase in score since 2015-17 in the work-life balance measure, and the largest decrease in score over the same period was in house price to earnings.

However, Leicester was one of 11 cities to see a decline in their overall scores relative to the previous index, driven partially by the improvement, especially for top performers like Leicester, hitting a relative ceiling.

Elsewhere in the region, Derby scored well for jobs but below average on health, work-life balance and environment. Derby saw the biggest increase in its score for jobs since the 2015-17 index, and the biggest decrease in its health score.

Nottingham performed well in work-life balance and skills, but performed below average in areas such as new businesses per head and income distribution. The city saw its biggest increase since the 2015-17 index in its skills score, and the biggest decrease was in transport.

The long term data suggests that performance over time on the index is not driven by a city’s starting position, but rather by a combination of local and national improvements in the economy and wellbeing factors. The figure below shows the change in average good growth index scores by variable across all cities since 2005-07 and 2016 - 18. Skills amongst the population of 16-64 year olds, alongside the number of new businesses created have seen the largest improvements in average scores over the period, however housing affordability and owner occupation have deteriorated over the period, alongside rising average commuting times.

The short term data tells a different story, as 11 cities in the index have witnessed a decline in their score relative to the 2018 index – this is partly driven by the fact that improvement (especially for top performers) has hit a relative ceiling.  However, the price of success has become increasingly evident, with declines in transport and housing highlighting the ongoing infrastructure challenges faced by UK cities. There has also been a decline in skills among young people (16-24) and a decline in overall health.

“Leicester continues to be one of the UK’s top performing cities, whilst we continue to see Nottingham and Derby performing above the UK average in areas such as house price to earnings, jobs and work-life balance. This is testament to the region continuing to position itself as a great place to do business.

“Despite a backdrop of uncertainty local leaders have had significant success in delivering good growth in the East Midlands. Our research shows the need to take a comprehensive approach to growth, focusing on improving productivity to compete on a global stage, but also on ensuring fairness and inclusive growth so that people and places don’t feel left behind.

“Over the past 10 years Nottingham has seen an increase in its index score. This has primarily been driven by an improvement in the skills of 24-64 year olds, which is due in part to the increase we have seen in new businesses, strong jobs growth and improved work-life balance. It is great to see the region’s diverse and resilient economy enable it to be a great place to live and work.”

Previous PwC research found that for those who can afford to buy a house in England, it will cost, on average, around £25,000 to live near the best performing state schools. In addition, PwC’s July edition of the UK Economic Outlook also found that rental affordability ratios in the UK have deteriorated, with some key workers now priced out of the rental market in the East Midlands.

“Whilst house price and economic growth is good news for many and for the region’s ongoing prosperity, it is clear that affordability of housing continues to be a challenge for many.

“Affordability not only has an impact on social mobility, it also has the potential to impact on productivity growth in the longer term by preventing people from moving to places, such as the East Midlands, where they can be most productive and access employment opportunities.” 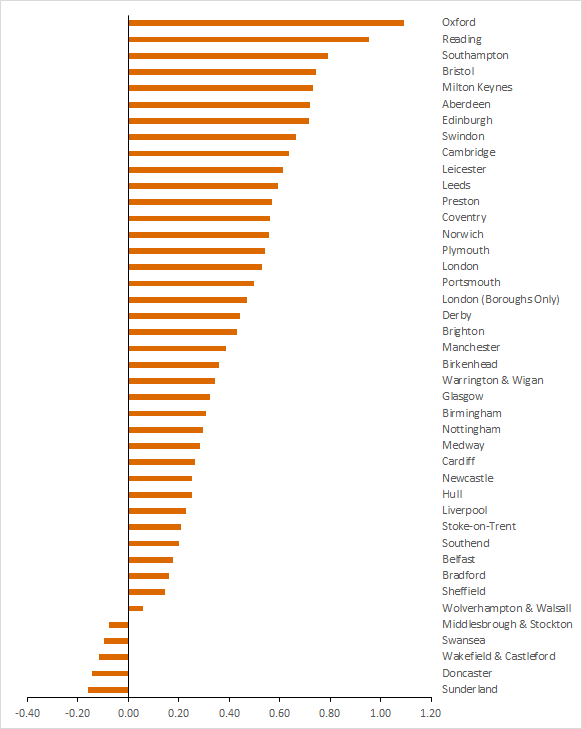 © 2016 - 2022 PwC. All rights reserved. PwC refers to the PwC network and/or one or more of its member firms, each of which is a separate legal entity. Please see www.pwc.com/structure for further details.