Although the net change has worsened since 2020, the number of closures per day has remained stable, 47 in 2021, compared to 48 in 2020. A decline was expected with the ongoing impact of the pandemic and as large retailers, that were on the brink of closure at the end of 2020, exited the market for good. Meanwhile, Government support for chain retailers was mostly phased out in July 2021 adding pressure to those retailers reliant on grants. 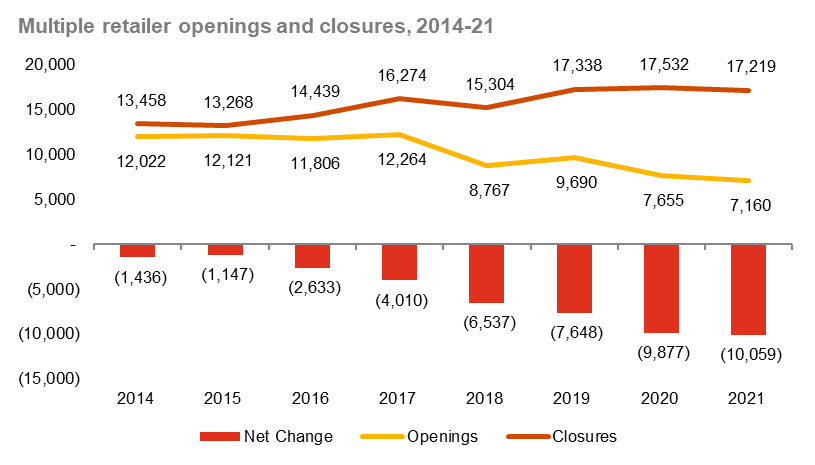 The number of openings has declined 26% since 2019, the last year pre-pandemic. So, although there were over 7000 new openings in 2021, many of these were the natural churn and re-siting of existing stores. Apart from takeaways, at +81, and government job centres, +33, no other category saw more than 20 net openings in 2021.

In a continuation of a long term trend, store closures peaked in 2020 in the height of the pandemic. The rate of closures has been growing since the mid 2010s, as more retail and service categories have shifted online. This had previously been offset by the rapid rollout of leisure operators, such as coffee shops, food-to-go and restaurants. However, such openings have slowed down rapidly since the mid 2010s.

In better news, the number of closures is now expected to slow down through 2022. The last two years have seen a shake out of some large fashion and department store chains who were on the brink of collapse. With these stores now closed, future store closures should begin to level off. Moreover, bigger chain retailers are more likely to be proactively negotiating with landlords, so the end of the rent moratorium in March 2022 is less likely to affect them.

Location matters above all else

Undeniably, Covid exacerbated the popularity of retail parks but even since restrictions lifted, footfall recovery has been much faster in out of town retail parks which benefit from easy access and good parking and bolstered by car travel recovering more quickly than public transport. Moreover, shopping centres have been hit particularly hard by closures of fashion retailers, department stores and casual dining restaurant chains - and therefore less attractive destinations in their own right. 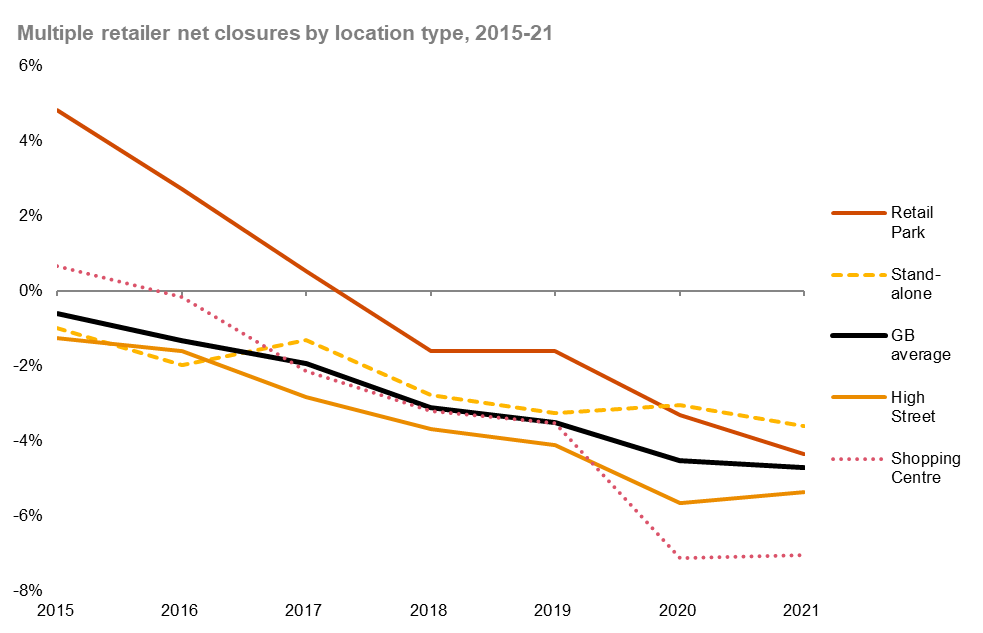 Since the pandemic, city centres and London postcodes have seen an acceleration in net closures as more people work from home or adopt hybrid working patterns. London is again the worst performing region by some margin. Similarly, the underperformance of the city of Birmingham has caused the West Midlands to perform worse than the East Midlands, with towns in the East Midlands more sheltered from the surge of Covid closures. Many will be hoping that hosting the Commonwealth Games in the summer will see a reversal of fortune for Birmingham.

“The last two years have been tumultuous for retailers but the closures we’ve seen are an acceleration of what was happening before the pandemic. Changes in consumer behaviour, changing patterns of working and the shift to online is impacting on both retail and service chain operators.

“Location matters most to consumers and whilst city centres and shopping centres falter, retail parks and standalone operators have broad appeal. Multiple operators are taking note of this changing consumer behaviour and are relocating stores to where their customers need them to be.

“Many of the CVAs and administrations that took place in early 2021 have now been captured, including department stores, fashion retailers and hospitality operators that have left gaps in city and shopping centre locations. There is a pressing need to radically reshape and even repurpose towns and city centres plagued by these empty units and shopfronts. To regain lost footfall, high streets must understand why retail parks are so attractive to consumers or look for ways to better serve local needs, encouraging independent retailers and entrepreneurs to take this opportunity to grow into the gaps that are emerging.”

On a sector by sector basis the growth seen in a small number of categories is nowhere near enough to offset the declines in other categories. Leisure dominates growth, with takeaway chains buoyed by a rise in delivery as well as walk-in demand. Smaller chains and franchise operators, such as cake shops and amusement arcades, have also been able to take advantage of lower rents and vacant units to expand their footprints.

The big net declines in many other categories reveal the impact of major shifts in how consumers buy and transact.  The shift to online, accelerated by consumer behaviour during Covid lockdowns, continues to be the biggest common denominator for closures in both retail and services.

“These latest figures for 2021 show the gap between openings and closures has widened, though hopefully this marks the end of the worst of the structural decline in chain retail exacerbated by the pandemic.

“2021 was an extremely challenging period for occupiers, with the first three months lost to a strict lockdown, limitations on international travel impacting tourism, increased migration to online retailing, mobility restricted across all sectors and continuing home working impacting city centres. There is no doubt that the numbers are stark and 2021 saw an acceleration in net closures across this sector, which in isolation looks dramatic.

“However, it's also worth noting that vacancy rates have started to stabilise across the market, meaning that the number of empty shops is no longer increasing. This is due to a significant uptick in independent retail and leisure businesses opening sites in units left vacant by chains. The rental tone is softening and more space has become available in prime locations previously occupied by bigger brands, paving the way for new and up and coming operators. This trend is significant for a number of reasons, not least because, in theory, the growing independent operators of today are potentially the chains of tomorrow. As these businesses gain momentum, they also gain better infrastructure and stability.

“Ultimately, these latest statistics on the performance of the chain sector should not be viewed in isolation and don’t point to ‘the death of the high street’, but rather represent a last shakeout of some of the heritage brands, paving the way for new operators and so the constant evolution of physical retail continues.”

At PwC, our purpose is to build trust in society and solve important problems. We’re a network of firms in 156 countries with over 295,000 people who are committed to delivering quality in assurance, advisory and tax services. Find out more and tell us what matters to you by visiting us at PwC.

PwC refers to the PwC network and/or one or more of its member firms, each of which is a separate legal entity. Please see how we are structured for further details.