PwC’s April 2020 Consumer Sentiment Survey reveals an improvement in UK consumer sentiment compared to March, recording an overall net increase from -26 to -14. This represents a notable recovery from March’s results, which posted the single biggest fall in quarterly confidence since the survey’s inception in 2008.

April’s survey was undertaken over the Easter weekend, by which time UK consumers had experienced over a fortnight of full lockdown measures including the closure of all but essential retail outlets, but alongside the announcement of multiple Government relief schemes, providing more certainty and employment security for many.

Although overall sentiment since the start of the coronavirus pandemic has been lower than any point since 2013, PwC’s barometer finds that confidence is still higher than during the recession of 2008-09 and the following period of austerity, giving some hope for a rebound in consumer spending once lockdown measures are lifted.

Increase in sentiment driven by the younger generation

Since PwC’s last temperature test of consumer confidence in March, sentiment has improved across every age group and region. Breakdowns show that the under 25 age group has shown the largest improvement in confidence (+38 points). With this group being most likely to work in lower-paid, less secure roles, their sentiment may have been driven, to some extent, by the rollout and implementation of the Government furlough scheme, which had only just been announced when March’s survey was undertaken.

Under 25s are also the most positive (+15) in relation to future prosperity, and are the only age group where more respondents expect to be better off than worse off in the next 12 months.

While all other age groups showed a net negative level of sentiment, interestingly the over 65s (-16) are more optimistic than both 45-54 and 55-64 year olds (-23 and -35 respectively). The reason is unclear, but could reflect concern over finances and the potential need to financially support the next generation in the run up to retirement, compared with the relative safety net of the ‘triple lock’ on state pensions for retirees. 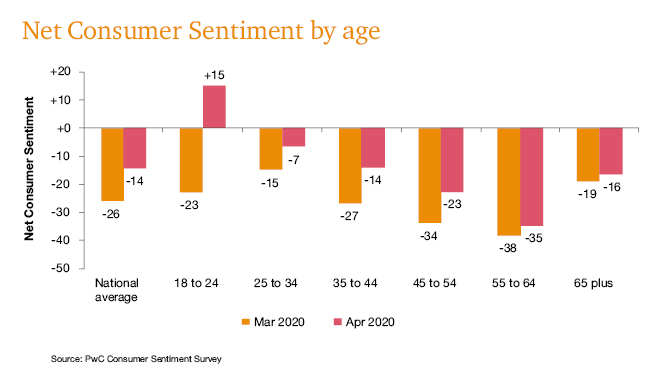 Meanwhile almost one in six respondents say they have bought more from local high streets, with 45-54 year olds (21%) the age group most likely to be shopping local more often. 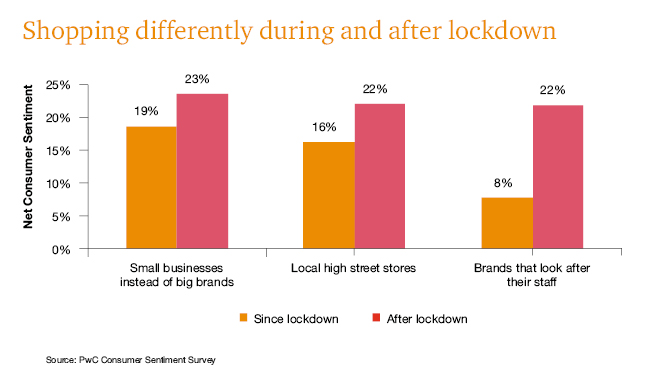 “It’s too early to say for certain, but the improvement in consumer sentiment could point to light at the end of the tunnel, as other countries begin to come out of their lockdowns and there is more certainty around the government relief schemes. This also suggests that we may see an upswing in consumer spending once the lockdown is lifted and operators are able to re-open.

“In these difficult times we are seeing signs that consumers are engaging with retailers differently and rewarding operators they perceive as more responsible. Consumers tell us that they will be doing more of this, with almost a quarter of respondents (23%) saying they intend to purchase more often from smaller operators instead of big brands, and favouring retailers who have looked after their staff during the lockdown.

"Appetite for food on demand and delivery services was increasing for many restaurants before lockdown, so seeing an increase in spend - especially among younger age groups - during this period is not surprising, despite some restrictions on the supply side. Post-lockdown, as more restaurants re-open and adapt to the pertaining social distancing measures, which could persist for some time, we will be monitoring consumer behaviour to see if there is a bigger and accelerated impact on food retail.

"Supply chains and drivers keeping up with demand will continue to be challenging especially in less dense populated areas but should not impact the 6% of all UK consumers looking to spend more on home delivery of meals when the lockdown ends."

About the survey findings