After six consecutive months of growth, latest PwC analysis predicts that the economy will contract in November by 5.7% as a result of the second national lockdown in England, before marginally recovering by 0.3% in December.

With the use of an advanced nowcasting model, which uses real time data to provide more timely estimates of economic output than official data releases, a month-on-month GDP growth rate of 0.4% in October is expected, representing a slow down in growth of 0.7 percentage points compared to September, due to the introduction of the tiered local lockdown measures in England.

“After a double dip, the economy should begin to rev up at the start of next year. While we initially anticipated that recovery would resemble a swoosh, we now envisage it being more of a W shape - albeit with a much smaller second drop.

“Although we expect a boost to economic activity as vaccines progress and confidence builds in the first half of 2021, the longer term outlook will very much depend on the nature and duration of further restriction measures and the outcomes of the UK-EU trade negotiation, which could weigh on growth.

“Depending on whether there are further lockdown restrictions, or an extension of the current measures, GDP may still be around 2.8% to 6.1% below the pre-crisis mark by the end of next year. Nonetheless, if the current national restrictions are able to bring the R rate to below 1 and if a free trade deal is agreed with the EU, UK economic output should recover to pre-crisis levels by Q3 2022 - however, an extension of the lockdown or a no-deal scenario may mean that recovery takes until the end of 2023.”

The outlook for Christmas spending

Despite household spending remaining 12% below pre-pandemic levels, retail sales have made a strong recovery. Although PwC’s latest Consumer Sentiment index shows a significant drop in consumer sentiment since September, falling from -1% to -10% in November, meaning that consumers expect to be worse off compared to last year over the next 12 months, with lockdown measures due to end in December, consumer sentiment may pick back up again just in time for the holiday season.

Online shopping offered a lifeline to the retail sector over the first national lockdown. While it took 7 years for online shopping to increase from 10% of retail sales to 20% in February 2020, it took just two months to get from 20% to 30% in April. In May, 34% of retail sales were conducted online. Online activity remains 8 percentage points higher than pre-lockdown levels and shows little sign of reverting entirely, as online shopping attracts new users, the products that people shop for online broadens, and health risks restrict preferences for in store shopping.

“Although the structural shift to online could mean good news for Christmas shopping and provides a safety net for retail even if lockdown or other restrictions remain in place, on balance the risks to Christmas spending remain skewed to the downside. While we have high levels of involuntary saving, the extension of the furlough scheme, and positive news regarding a vaccine, - the considerable uncertainty surrounding the economic outlook and Christmas plans are likely to weigh on spending intentions.

“However, the outlook for January sales spending is more positive. Optimism may pick up in the new year if the vaccine rollout ensues. In addition, if consumers are largely restricted to online shopping, retailers are likely to have unsold stock, which could lead to bumper January sales discounts, thus encouraging a release of pent-up demand.”

The full UK Economic Update will be published on 24 November and can be found here. 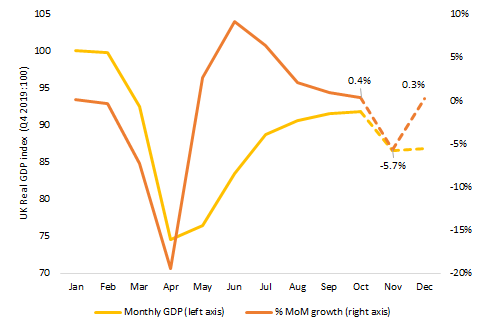 Comparison of 2021 GDP projections and scenarios

Going into the year 2021, uncertainties remain around the future trade relationships between the UK and its main trading partners, and the trajectory of the pandemic. Factoring in recent economic and political developments, our projections are broadly in line with other external projections.

For the first time in our UK Economic Updates, we use our nowcasting model to project monthly GDP growth. Nowcasting is an advanced statistical model that is known for its ability to produce short-term predictions of economic indicators with a relatively high level of accuracy and frequency. In an ideal world, a wide range of macro indicators (e.g. GDP, inflation) at a high frequency (e.g. daily or monthly) would be used to monitor and evaluate real-time economic activities. However, often these indicators are available at a different frequency (e.g. quarterly) or are reported with a lag (usually 1-3 months). Therefore, most forecasters provide low frequency forecasts but we are one of a few organisations to bridge this gap and develop high frequency forecasts.